Before returning to Michigan to see my family, I received updates from Google Trips about what to do in my home city, Grand Rapids, from multi-day itineraries to must-see activities. Usually, I brush these tips aside, suspecting that after many years of living there and many more visiting the area, I have a good sense of what to do. But this time, I allowed myself to read a few recommendations to see what others have to say about this fair city.

I was surprised to find several suggestions for places I’d never heard of: Lookout Park (a.k.a. Makeout Point, according to locals), Punk Island (also called Jackson Island or Island Number 3), and a Fluoride Memorial. (I couldn’t make this up! The Fluoride Memorial actually does make sense, given Grand Rapids was the first city to introduce fluoride into its water supply in 1945). Clearly, there are still some awesome deep cuts for me to see.

I also saw multiple references to a place called the Meyer May House, a century-old home designed by Frank Lloyd Wright. I’d heard of the building in passing over the years but never took the time to read up on it or plan a visit. When I mentioned this to my mom, she said she’d visited as a chaperone on my brother’s school fieldtrip about 25 years ago. Since she loves me, she agreed to visit again. We never knew TripAdvisor lists the house as the #1 thing to do in Grand Rapids and we quickly saw why.

After my last attempt to bring our baby to a museum I was excited to see, I felt wary about bringing her. But this time, I had backup support in my mom, and I knew there would be large open spaces to explore should she get funky. So, the three of us drove to the Heritage Hill historic district and over to Madison Avenue to check out Mr. Wright’s Michigan masterpiece. 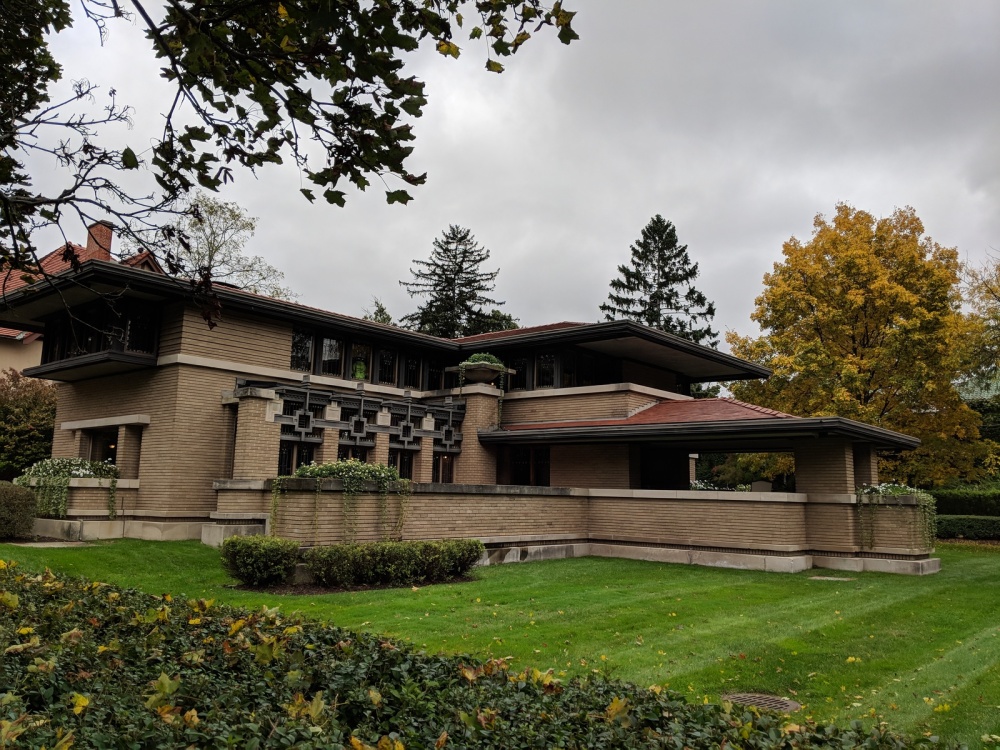 When I laid eyes upon the house, I could tell it was something special: its style doesn’t match the surrounding Victorian homes and it has a certain je ne sais quoi. Our visit began in the tourist center next door with a film examining the history of Frank Lloyd Wright, a prominent architect whose name I assume you already know, and Meyer May, a local Grand Rapids clothing store owner, who hired Wright to build this home well over a century ago. It also details how the furniture company Steelcase purchased the home and brought it back to its original form in the mid-1980s, after a large investment and years of painstaking work. (If you can’t wait until you’re there, you can watch the film online in four parts.)

And then the real highlight of the tour happened: Eliza behaved like an angel and only made a few peeps but was otherwise really interested. Oh, and we got to go on free guided tour by a talented docent who showed us around all corners of a 100 year old perfectly restored Frank Lloyd Wright home.

Wright truly spared no expense to craft this home, and it seems that Steelcase did the same with their restoration. The craft and attention to detail that went into the home is something you have to see yourself. My photos of the interior really don’t do it justice, but I gave it a shot (or three): 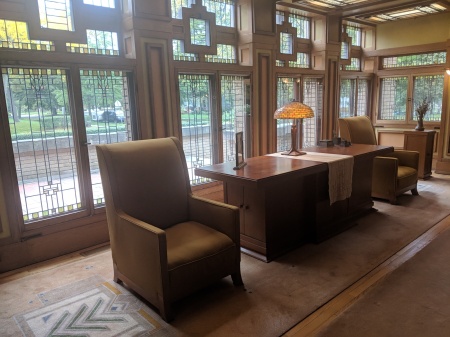 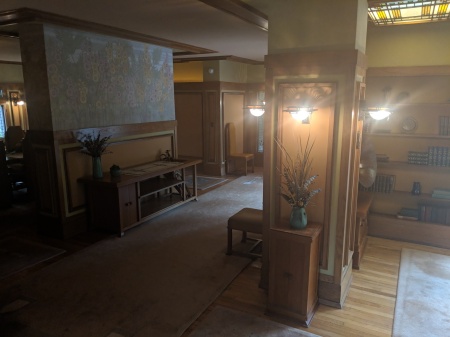 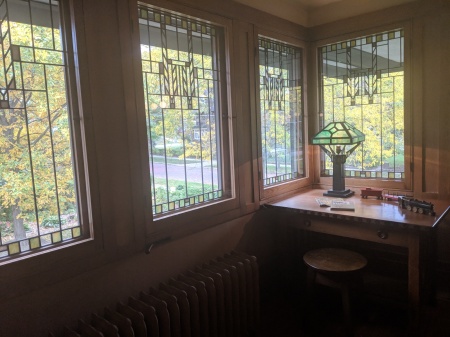 If you visit this remarkable building almost hiding in plain sight, make plans accordingly, as their opening times are unusual and infrequent: three days a week for three hours at a time. (See details here). Our tour guide mentioned that they also welcome their docents to have dinner there annually and often host employees of local non-profits and Steelcase clients. Those are long-shot ways to see the space in its glory: over an evening meal with the candles lit and the ghosts of the past century surrounding you. (No one said anything about it being haunted, but no one said it’s not either.)