When Sean’s cousin was getting married in New Orleans, we literally flew all the way from New Zealand. Well, we went from Auckland to Melbourne to Los Angeles to New Orleans, allowing a few extra days in case of travel delays, to acclimate to the dramatic change in time zones, and to explore the city.

Call me a fan of esoteric (and sometimes macabre) places, but I’d been looking forward to visiting the New Orleans Pharmacy Museum. Home of the first licensed pharmacist in the U.S., it’s located in the French Quarter, which is a site to behold given its popularity and its designation as a National Historic Landmark.

To reach the tiny museum on Chartres Street, I allowed plenty of time to push Eliza in her stroller through the steamy (and busy!) streets of the Vieux Carré as the temperature nearly reached 90°F. The tickets are a reasonable $5 for adults, which includes a daily 1 p.m. tour, so I was sure to arrive a few minutes before the tour began. Let me set the stage for you: The museum is essentially one room in the old apothecary building, though its upstairs holds lots of memorabilia and an open courtyard sits directly behind the building.

The first sign that the stars were not going to align happened pretty quickly. We had hardly stepped through the door when Eliza decided she was not about being in her stroller with all there was to see in the room. Thinking I could satiate her with a few minutes of walking or crawling, I let her down but she quickly went to touch all the things she shouldn’t (e.g., pristine glass enclosures, funky old relics, you name it!). So I bundled her back into the stroller. There were a few yells, but she calmed down pretty quickly—until the tour began.

Since the museum is only in one room, the guide joked that we should all gather near him so the space would feel bigger. Eliza wasn’t quite in on the joke and started making noise soon after he started talking. Luckily, I saw sunlight streaming in from the courtyard and plotted our escape, much to the joy of fellow museum-goers.

Normally, I don’t feel the need to apologize or make ourselves scarce when we’re out and Eliza makes noise. We were all children once, and children can be noisy. So can adults, if we’re being honest. But I knew that if I stayed in the museum, no one would be able to hear our host—who was hilarious and incredibly informative, from what I could tell—and it wouldn’t be a pleasant experience for any of us.

So Eliza and I broke free into the great outdoors of the beautiful brick courtyard. Immediately, Eliza calmed down once she saw the fountain and the ivy and the scattering of leaves on the ground for her to pick up and throw. She had the time of her life within moments of being set down to explore.

I, on the other hand, sulked for a few minutes, bemoaning my status as a parent and longing for the days when I could visit a museum in silence—and not the kind of silence where your baby is sleeping and you’re not sure when they’re going to wake up, but the unencumbered kind.

After watching Eliza play, I started to play with her too and quickly got over myself and the $5 I surrendered by missing the tour. I really started to have fun. Like, a lot of fun. We laughed as Eliza looked at her reflection in the fountain. I rerouted her from the stairs and back to safety and she didn’t even cry. I saw her fall and regain her footing too many times to count.

I have no photos of the interior of the museum since we had to move out of it so quickly, but I had ample time for courtyard shots: 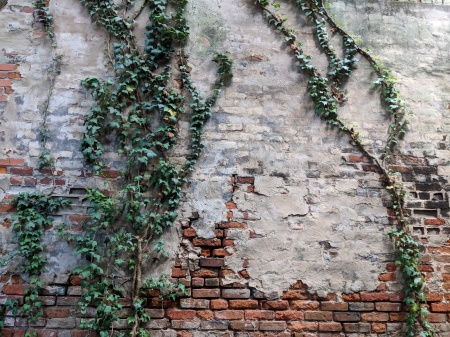 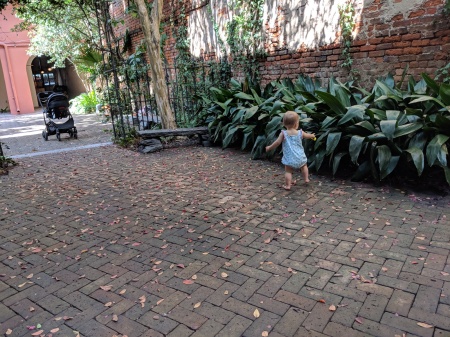 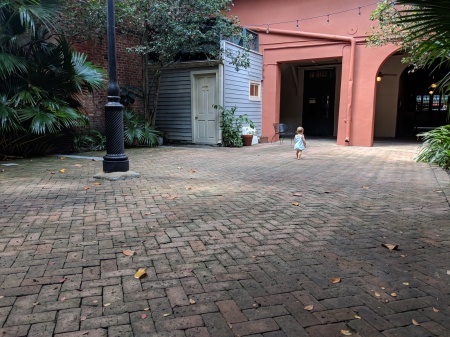 I kept telling myself that I’d go back the next day to the tour by myself, enlisting Sean’s help, though I knew that probably wouldn’t happen. There were too many things and people to see. But the bits and pieces I could hear from the tour made me think I would’ve loved it. For example, they claim to have the original love potion #9, and did you know that you could once buy your own bloodletting device?

If there’s a place you really want to go for yourself, do yourself a favor, if possible, and leave the little one(s) at home unless you know they’ll be on their best (quiet) behavior. But also, know that many museums and public places have alternative areas for kids when they’re squeaky and need a place to roam free. And for goodness sake, don’t feel too sorry for yourself like I did if you end up there: you’ll miss out on some unexpected fun.