Understanding what’s behind what you taste

This morning, as Eliza ate her way through a bowl of oatmeal with frozen blueberries we picked last month at a local farm, I reflected on the tasting notes of the coffee I’d just prepared. Eliza and I took turns smelling the last of the beans ground from this particular Ugandan roast ordered from subscription service Driftaway. The packaging suggested I should expect touches of chocolate, oak, and orange, but Eliza told me she thought it smelled like “Dada’s coffee.” She then lifted her own little sipping cup, which she had spooned full of oatmeal and blueberries.

Well before I ever knew the taste of coffee, I understood this fixture of adulthood to fall into one of two categories: strong, unadorned, and functional (i.e., the kind found in what I imagined to be a corporate office or gas station) or else creamy, sweet, and likely picked up at Dunkin’ Donuts. I ordered my first cup the summer before my senior year in high school, while on a roadtrip with one of my best friends. While at Collegetown Bagels in Ithaca, New York, he and I agreed we were finally old enough to order a coffee to accompany our bagels. I may have muffled the actual taste with a hefty powdering of mocha, but since then, my appreciation for, and understanding of, coffee has continued to evolve. And no matter how you take it, any cup of coffee tells a complex story of movement. The history of its cultivation, the influence of colonialism, and the role of war in what we drink tie in to ongoing, present-day labor, environmental, and economic struggles. Rather than cause us to shy from these realities, our regular caffeine (or decaf!) fix should encourage us to learn more. 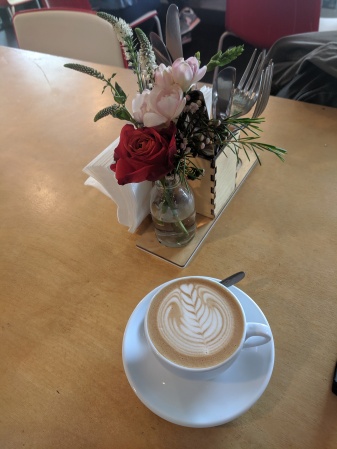 Traveling can be an ideal way to break away from your usual grind, but you can certainly expand your coffee appreciation with these suggestions when closer to home as well.

Read the printed materials around you: One of the qualities I love about stopping at a cafe is finding a moment’s pause. I sometimes fail at this advice myself, but fight the urge to pull out your phone and instead reflect on what you see around you. Reading material abounds: coffee packaging often provides insight into the roaster and the roast, postcards and fliers on the counter sometimes provide a snapshot of the coffee producers whose work you’re tasting, and even if you’re in line, the surrounding wall art can reveal stories. For instance, I only discovered the growing coffee production happening in China’s Yunnan province after digging deeper (yes, on my phone, sorry!) after seeing a mention of the region on a Starbucks poster while waiting for a flight at Gerald R. Ford International Airport in Grand Rapids, Michigan. And often enough you’ll find a beautiful array of magazines and books worthy of your time.

Chat with your barista: Plenty of people think little about spending a night at a bar in an unfamiliar city and striking up a conversation with the bartender or the person next to them. But the same is often the case when it comes to coffee. If you don’t have an espresso bar in mind, read some of our coffee recommendations or search for “local coffee roaster” instead of “local cafe.” If it’s prime commuting time and a crowd is curling one coffee-seeking individual after another behind you, you might want to save the chit chat until things calm down. But know that many of the people you’ll meet who work in coffee do so because they love to share it with others. That expertise can feel a little daunting, especially if you don’t have any yourself, but don’t let that suppress your genuine curiosity. Just be honest about your own knowledge (or lack of it), and even the simplest starting points can go a long way: What kind of beans are you using at the moment? What do you think of them? Listen to what you hear, and be mindful and respectful if somebody doesn’t seem all too chatty. Over time, you’ll begin to get a better sense of what you like, what you don’t, and the attributes that inform the complex qualities of coffee when it reaches your palate.

Ask to do a tasting: Until I visited Tim Wendelboe roastery in Oslo, Norway nearly a decade ago, I never could have imagined that it was possible to sit for coffee in a similar vein as visiting vineyards for wine tastings. There was nothing formally scheduled, but after chatting a bit with the barista about a few favorite places we shared in New York, I ended up pulling up a seat at the (coffee) bar for more than an hour and tasting everything that came my way, including a sampling from the famous Hacienda La Esmeralda. By the time I stood up to leave, I felt loopy with my caffeination, but from that day forward, I’ve encouraged anybody traveling to Norway to make their own pilgrimage to Tim Wendelboe for the experience as well as its impeccable coffee. You may also luck out at your local cafe if you encounter a barista willing to offer you an impromptu personal tasting tour. (Don’t forget to pay attention to the preparation process as well as the taste!) But more than likely you’ll want to keep an eye out for regularly scheduled coffee tastings, such as the first ones I ever attended at Think Coffee in our former neighborhood. And again, find a way around any feelings of intimidation. More likely than not, you’ll find a patient and encouraging session that leaves you with a deeper understanding no matter your skill level.

Take a class, often for free: While living in New York, I felt like I was on vacation each time I visited the Counter Culture lab in SoHo for free public training sessions. (Their Eventbrite page lists a steady lineup of regular sessions open to anybody who registers, or who just drops in.)  At the time, these were very much local events (a 10 minute walk from our home), but I also met a Polish couple there who were touring the United States for a few months and added a deep-dive into decaf to their travel itinerary. If you anticipate being in Asheville, Atlanta, the East Bay, or any of the other dozen U.S. cities where Counter Culture has a training center, add their “Fridays at 10 a.m.” classes to your calendar. In Boston, George Howell has an almost daily lineup of events. And shortly after we arrived in Providence a few weeks ago, I walked over to Bolt Coffee’s roastery for a delicious, informative, and conversation-filled public cupping. Now, I wish I had the chance here to create a thorough map of all the spots around the world that offer coffee trainings, but ask around on your own and you’ll likely find a few choices.

If your idea of coffee tourism is more along the lines of finding a cozy cafe and sitting with a good book, the notion of an extended discussion or an involved tasting or training session may be the last thing you’d like to seek out. But wherever you are and however you incorporate coffee into your life, the more you can understand the attributes that make it what it is, the more appreciative you’ll find yourself, not only of the taste but also of the people and systems involved at every stage in the process of something we all too often take for granted. Now, as I give thought to my next breakfast-time pourover alongside my daughter, I might have to seek out a coffee with notes of blueberry.