Shortly after we arrived in Providence, I noticed a plaque at the corner of Angell St. and Elmgrove Ave. on the city’s east side noting that someone named HP Lovecraft was born nearby, though his home no longer remained. I first assumed that HP Lovecraft was a pen name but later learned that, no, he was a real person—indeed, one Howard Phillips Lovecraft. The streetside memorial recognizes him as “Father of Weird Fiction and Son of Providence.” 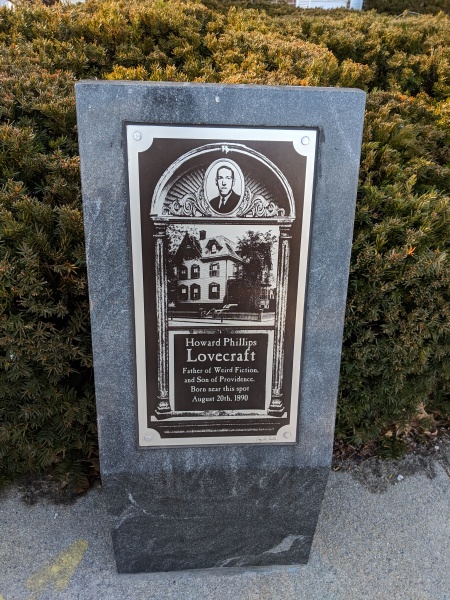 I had first seen HP Lovecraft’s bust at the quirky and inviting Providence Athenaeum, an independent library, but felt more drawn to Edgar Allan Poe’s history there (which mostly involved a rejected engagement, oh so scandalous). But Lovecraft’s name surfaced so many times in Providence’s history that I felt an obligation to look him up and read some of his work.

Although his writing career began roughly a century ago, Lovecraft has become something of a recent sensation: Though he didn’t receive much acclaim while alive, his popularity has surged in recent years. Atlas Obscura summarizes his life in Providence, with only a brief two-year stint in Brooklyn keeping him from his beloved city. And now the city seems to love him back, revering him with monuments and local celebrations. Noel Rubinton traced Lovecraft’s footsteps for The New York Times, detailing the many places to visit in Providence to truly understand Lovecraft’s upbringing and world.

Well, since today marks the 82nd anniversary of HP Lovecraft’s death on March 15, 1937, I embarked on a journey to his grave and read one of his spooky stories, “Cool Air,” to mark the occasion. I won’t give anything away about this short story but let’s just say it fits with the theme. As I only begin to learn about Lovecraft, it’s also important to understand and grapple with the criticisms of his work and legacy.

Apparently, one of Lovecraft’s favorite pastimes was going out for long walks, so I thought it only appropriate this morning to do the four-mile round-trip to the site of his grave on foot, even with a forecast of rain. The temperature was rather warm, and it felt like one of the first days of spring. Birds chirped, snow piles melted, and a large rafter of turkeys congregated near the cemetery’s entrance.

I’ve walked much of Providence over the years (having spent several weeks during several summers here for work), but this morning’s walk brought me to an area where I’ve never spent time. But whether a city is new or feels like home, there’s much to be learned by walking its streets and simply taking in your surroundings. This morning, I noticed how many homes in the area were built before Lovecraft’s time, meaning he would’ve seen earlier iterations of those same stately houses. Did he meander up Blackstone Boulevard and gawk at the mansions? He certainly didn’t use Google Maps to get to his destination. Perhaps he wandered or had a map in mind. (I was pleased, however, to find his burial spot clearly marked and easy to find.) 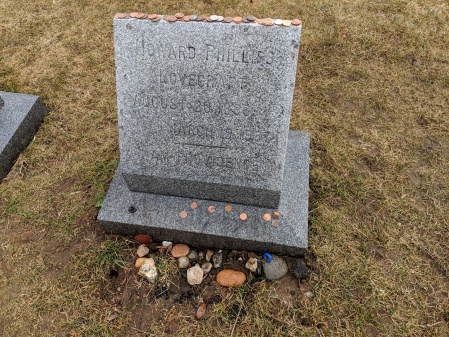 When I found the headstone marking his grave, it was hard to read parts of the old and weather-worn granite, but there in the stone you can make out his epitaph: “I Am Providence,” words he once wrote in a letter to a friend. It serves as a subtle reminder to think twice about what you put in writing: not only could it haunt you in your lifetime, but it might also stay with you forever after. But that can be for good as well as for bad, and it’s clear his writing continues to influence many readers and fans. There were several pennies on his grave, so I added one of my own, standing there alone on a drizzly late-winter morning 82 years after his death.

As for us: We’ve now been in Providence for six weeks, so it’ll be a long while before we should think about asserting “Sean, Eliza, and I Are Providence.” (That doesn’t quite have the same crisp ring to it, does it?) But even so, we’re enjoying our early honeymoon phase here. I’d say we’re at the “We Really, Really Like Providence” stage, but we have a lot left to learn and explore first, so please don’t carve that into granite just yet.