Deciding on Salamanca, two hours west of Madrid and 50 miles from Portugal

Both Sean and I studied Spanish for several years, but we still don’t feel quite adequate when it comes to holding conversations or listening to native speakers chat at their normal pace. Since we knew we’d be back in Europe this autumn, we agreed that living in Spain for a month would do wonders for our ability to focus on improving our language comprehension and speaking ability.

Why did we choose Salamanca?

Once we decided to spend the month of November in Spain to improve our Spanish, we had all options on the table in terms of where in Spain. We read up on a number of parts of Spain, assessing each against a relatively straightforward list of requirements:

1.) easy to reach on a direct flight from Ireland,
2.) removed from the heavily touristed beaches
3.) fewer English speakers so it would be harder to drift into our comfort zone

Having spent a week in Barcelona together last year, we thought about returning but since Catalan is the dominant language there, we didn’t think it would be our best option for truly immersive Spanish (though many people there speak/comprehend Spanish, of course). We considered Madrid as a vibrant capital city  where neither of us have spent much time—Sean spent one day there in 2011, and I had never been. I read that the Spanish accent in Madrid is supposed to be incredibly clear and easy to understand, which sounded perfect for us to jump right in. Both Granada and Seville were top contenders as well, known for their architecture and sunshine.

Then, after I stayed up too late one night reading articles about the best places to learn Spanish, I told Sean that I’d added a city into the mix that we hadn’t considered: Salamanca.

We sat down together to discuss our options and to make a decision. Given our level of intermediate, not advanced, Spanish, we thought Seville and Granada, with their strong (and apparently beautiful) accents, might be more difficult for us to jump into. So we were left with the metropolis Madrid (Sean’s preference, no surprise!) or the smaller but alluring Salamanca (my horse in the race).

I thought Salamanca might be a tough sell for Sean, as he loves big cities and having lots and lots of things to do, but I thought it would be a perfect choice for us as a family: it’s full of history, a vibrant university town with many students, and enough nooks and crannies for us to explore—as well as many day trips within our reach, accessible by train, bus, or rental car. The fact that our money would go further in Salamanca didn’t hurt, since we knew we’d want a two-bedroom apartment to keep Eliza (and therefore ourselves!) on a regular sleep schedule with a good-sized kitchen for plenty of home-cooked meals. And I have to say there’s just something about university towns that I can’t resist: Ann Arbor, Michigan and Providence, Rhode Island are two of my favorite places in the United States.

After much discussion, Sean agreed with my thinking: Salamanca would be the right choice for us, though I suspect we both had some lingering doubts until we arrived. One week into our time here, we’re absolutely convinced we’re in the best possible location. 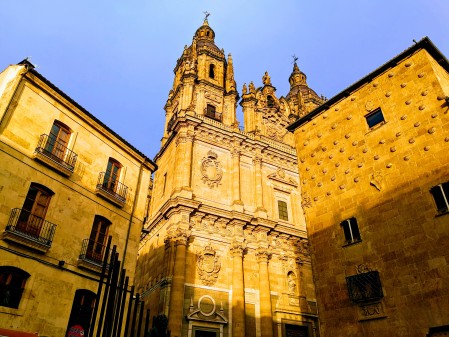 So glad you asked!

About 150,000 lucky souls call Salamanca home, though there are plenty of visitors too. (For rough comparison to U.S. cities: the population is comparable with the likes of Springfield, Massachusetts and Rockford, Illinois.) It might be because we’re here in November, rather than in the bustling month of May, but the city really hasn’t felt overrun by tourists.

Honestly, the cobblestone streets, the main plaza, and the historic buildings make me tear up, they’re so beautiful. And there are seemingly countless areas to explore on foot. It helps that much of the city is defined as pedestrian areas, though somehow occasional trucks and cars can mosey their way in, so it’s important to pay attention. The views of the Old and the New Cathedrals are prolific, and it’s hard not to gasp once you enter such gargantuan and magnificent spaces.

As for learning Spanish, I’m studying at the University of Salamanca. Celebrating its 800th (!) year, it’s the fourth oldest university in the world and the oldest in Spain. I’ve had a great experience of language immersion so far. I will say, it’s been hard for me to get used to the old-school processes, like our class locations being posted on a piece of paper in the courtyard pictured below. Also, class changes must be done in person during a specific window of time, when many students are already in class, but that’s their way and I don’t think it’s changing any time soon.

I’ve found it easier to understand the Spanish spoken here, and the longer we’ve been here, the easier it becomes. We haven’t heard much English, beyond a group of study-abroad students, a local resident who grew up in Florida, and a couple visiting from Oklahoma City. Whenever I’ve struggled to find the right words in Spanish at a local cafe or shop, I’ve been warmly helped or graciously corrected. And, not surprisingly, Eliza has been a hit too. She is so eager to walk everywhere on her own, sometimes even asking to hold our hands (swoon!). And she often waves happily at strangers during our many walks. 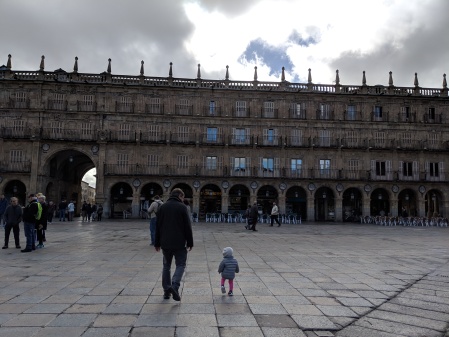 Any drawbacks to Salamanca?

When we’ve told people we’re spending the month in Spain, they often remark about how the sunshine and warmth will be good for us… but the Salamanca region has been colder than we expected. It’s pretty similar to the midwestern and east coast U.S. temperatures we’re used to for mid-autumn. On the plus side, packing warm clothing was easy.

Since we’ve been here just one week so far, it’s too early to say whether one month or longer is too little, just enough, or too long to be here as visitors. We have plenty to experience, and we both want to get outside and wander the city even more, so I’m guessing we won’t run out of things to see and do—and if we do, we’ll simply have to do a victory lap of our favorites.

Both Sean and I are thrilled to have made our choice to spend our time practicing and improving our Spanish in Salamanca, but we also know it can be even more about what you put in to making something a great learning experience, rather than exactly where you are.

(And we’re getting the best of all the worlds: we flew into Madrid, we’re spending our month in Salamanca, and then we’ll visit Seville and Granada as well as a few smaller towns on a nine-day road trip before heading back to Ireland together from Málaga.) 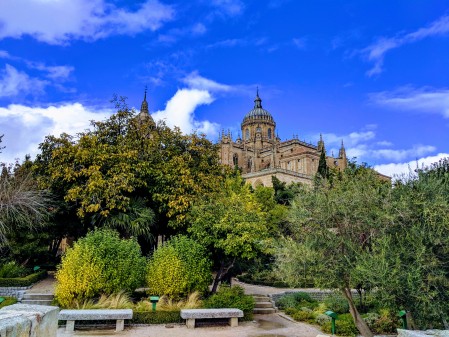