I’m a big fan of funiculars and cable cars and recently kept my giddiness in check while crammed into the Namsan Cable Car as it ascended with stunning views of Seoul. What it leads up to is even more spectacular: the Namsan Tower, hovering over the city at approximately 236m. It’s the second tallest point in the city (second to the Lotte World Tower at a gargantuan 554.5m). The day before my cousin’s wedding, we went to see such heights.

Our bus dropped a group of family and friends at the base of the Namsan Cable Car entrance. A one-way adult ticket cost 7,000 won (US$6.22), and a round-trip ticket would have cost 9,500 won (US$8.47). We decided to just take it up one way, since we planned to meet our bus close to the top of the hill.

The journey to the top was smooth and quick, and the views were breathtaking—as was the sheer drop below us.

Once we stepped off the cable car and began to wander around the grounds beneath Namsan Tower, we were welcomed with stunning vistas and traditionally dressed men and women wearing vibrant hanboks, the traditional clothing of Korea. After snapping a few—okay, several—obligatory photos, we made our way toward a ticket window to purchase whatever pass we needed to take an elevator to the top of Namsan Tower.

The views were already picturesque without the additional 138.7 meters, but we were in full vacation mode and everybody else in our group planned to go up to the observation deck so we agreed to do the same. When we went to buy our tickets, we couldn’t believe the choices we faced.

For the two of us to purchase adult tickets, it would have cost us 20,000 won (US$17.82)—10,000 won each—but we did a double-take to ensure we understood an interesting combo package. For a total of 26,000 won (US$23.26), we could get not only two adult admissions to the observatory but also two large beers and a large popcorn.

Wait, two beers and a popcorn for less than US$5.50?! This was less than the cost of one beer in most of the restaurants and bars we saw around the city. 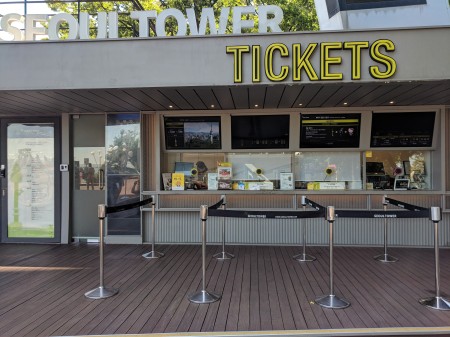 It may have been before noon, but we were on vacation and the deal was too good to pass up. After ordering our combo, we had to descend a set of steps down to the base of the tower to redeem our ticket at a concession stand, as if we were readying to see a film at the cinema. They had several flavors of popcorn but we stuck with plain, which tasted surprisingly like American movie theater popcorn—light, airy, and a tad saltier than necessary but delicious. The Kloud beer (Korean lager) was nothing special but we found it refreshing. 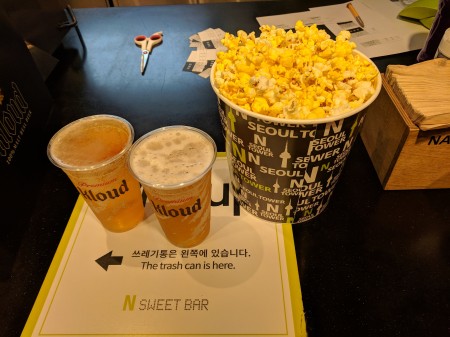 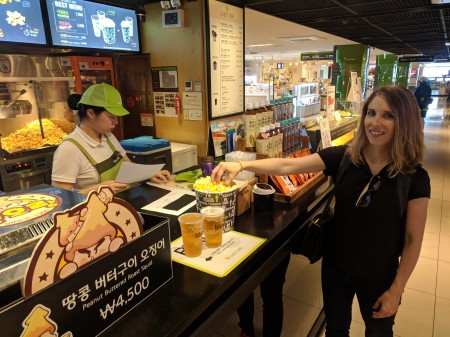 Perhaps the beers helped, but we ended up having a great time at the tower. The views extended further out than we could have imagined, and the sky was crisp and lovely. The tower itself was well designed and had distance markers to most major international cities, which was fun to re-reference ourselves at each window thinking about where else in the world we were looking at any given time. We knew Seoul had a million people more than New York City, but it was remarkable to see the expansiveness on both sides of the Han River.

Although we finished our beers, we couldn’t finish our popcorn. And when we returned to the base of the tower again, we accompanied my cousin and his soon-to-be-wife as they signed a “love lock.” His parents, my aunt and uncle, did so as well, celebrating their 45th wedding anniversary. It was touching to witness.

Many other “love locks” covered several fences, and shops on-site even sold locks and markers to encourage the practice. They’d clearly turned one city’s blight into another’s celebrated visitor’s token. 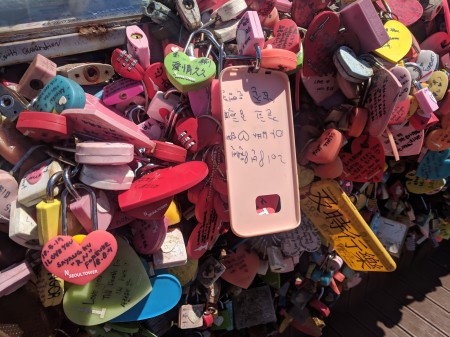 I don’t know how many other observation decks around the world come with a beer-and-popcorn deal, but be on the lookout for surprising options at tourist destinations, and be open to checking out spots that might be tailored for tourists. Above all, there’s no shame in having a beer before noon if it’s a deal and part of a cultural experience. (I just made up those criteria but think they work remarkably well).