Reflections on what it’s really like traveling with a baby

And just like that, we’re celebrating a year since launching Bond & Thomas in summer 2018! We’ve written 80 blog posts about our travels after setting off from New York the previous spring. Since then, we’ve been traveling pretty much nonstop with our now (almost) 2 year old.

Thank you from both of us to all of our readers both near and far. To mark our first birthday, we thought we’d do something a little different: interview each other. We’ve certainly chatted away for hours upon hours during our travels, but this is the first Q&A we’ve published on the blog. If you enjoy the format, leave a comment below or send us a note. Looking forward to another year ahead! 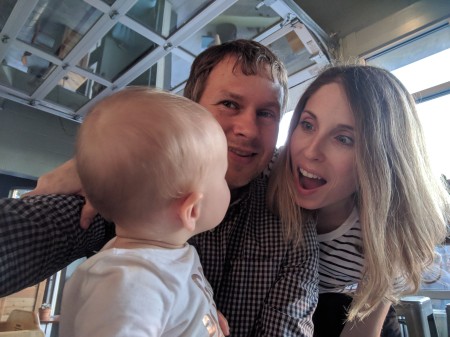 What is it really like traveling with a baby?

Sean: When Eliza was only a few days old, stepping outside our apartment in the East Village of Manhattan felt like we were undertaking some pretty serious travels with a baby. It felt even more momentous to rent a car and drive up the Hudson River for a daytrip and then out to the Pocono Mountains in Pennsylvania for our first overnight stay. As we began to take trains and planes to ensure Eliza experienced time with our families, each of these early trips reinforced just how much our travels as new parents were an entirely different kind of travel. But the more we’ve done, the less it feels like we’re traveling with a baby, and the more it feels like we’re just being ourselves together, no matter where we are.

Cathlin: At first, there were a lot of logistics that went into every stage of travel, but then we began to hit our stride and traveling with our baby felt pretty, well, normal. Each day became a lesson in mindfulness and taking life more slowly (and less seriously). Travel is a great way to let go of strict timetables and allow time to amble; what should be a five minute walk can take twenty, but I’ve never seen such fascination with rocks, sticks, and bugs along the way!

What was especially hard? What did you think would be difficult but actually ended up being easier than expected?

Cathlin: I’ve found the hardest part to be packing and unpacking so often along the way. Even though we pride ourselves on packing lightly, there’s just so much more stuff to bring as parents traveling with a baby. Ultimately this makes life easier, but it doesn’t always feel that way. I thought getting Eliza onto solid foods would be more difficult than it actually was. We ended up finding plenty of healthy local baby foods (though we almost mistakenly purchased a rabbit puree in Poland, thinking it was vegetarian because it also had a carrot on the jar, whoops!), and we had many opportunities to share the different flavors and spices of various cuisines with Eliza, which seems to have made her into a fairly adventurous eater now.

Sean: I have to say “sleep” as my answer to both questions. We wrote a little about how we did (and didn’t) negotiate routines, but some nights were memorable for all of the wrong reasons: when early morning wake-ups crept forward incrementally until they were simply middle-of-the-night wake-ups; when we’d repeat calming songs made up on the spot to try to lull Eliza to sleep; when we’d be awoken and need to remain so incredibly still as if we were gazelle at risk from a nearby lion. And yet for all of those moments, in the aggregate Eliza’s sleep really has been better than we could have imagined. And those moments were absolutely difficult at the time, but somehow they also feel like such special memories looking back.

How do you feel about your daughter getting her own airplane seat as she turns two??

Sean: It’s about time! Well, what’s remarkable is witnessing your child grow up in front of you, how it feels like you’ll always have this little baby who will fit just fine on your lap, and then suddenly, and yet not so suddenly at all, she really doesn’t fit the same way anymore.

Cathlin: As much as we’ve loved our travel cuddles, I’m feeling pretty ready for all of us to have a bit more space. We got a taste of what this would be like on the buses in the Baltics and loved seeing how she took her pride in her own seat (and how much comfier we all felt).

What experiences do you think were most meaningful or impactful for Eliza?

Cathlin: I’ve often had the realization that we could be anywhere, traveling or not, and she’d be herself: a very happy child. I believe babies are more flexible and adaptable than they get credit for. That being said, I think Eliza has seen the joy and awe that our travels have inspired in Sean and myself and it seems to have rubbed off on her. Adapting to multiple time zones, cultures, foods, mealtimes, and ways of life has made Eliza into a pretty even-keeled kid.

Sean: Honestly, just our time together. For most of our travels, I don’t think Eliza knew what “traveling” was, only what it meant to be with us, no matter where we were or what we were doing. And as a result of where we were and what we were doing, she also saw and experienced a lot of different environments and met so many people along the way. We kept her warm during snow squalls in Iceland and kept her cool during a sweltering stretch in South Korea. We walked as much as we could, and not only did I try to carry her in our BabyBjorn for as long as I could, but also we turned her outward to see as much as she could. It’s remarkable to witness a baby’s curiosity, and I like to think that this is the same curiosity we felt so consistently during our years living in New York. But if there was one single moment in all of our travels that was scarcely believable to Eliza, I think it must have been when I brought her on a giant trampoline for the first time in Riga, Latvia. She didn’t know what to do at first, but oh did she bounce—and refuse to stop! 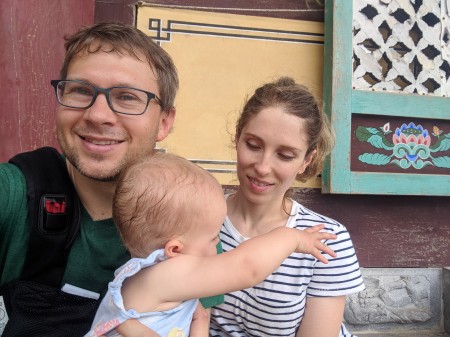 Even though you’ve been traveling together as a family, what are some of the most memorable moments you’ve had alone?

Cathlin: When I had at least a few minutes to myself, sneaking away to find bubble teas in cities across the world felt like a perfect, and refreshing, mini-getaway for me. But nothing compares with having a full evening to yourself: seeing the opera in Riga (Black Swan) and a Broadway musical in Dublin (Come From Away) were some of my favorite moments alone. And then there was the time I stripped down with several dozen strangers at the Spa Land Centum City jjimjilbang (spa) in Seoul, co-existing happily with other folks enjoying their evening at the spa and then savoring a beer at the end of it.

Sean: During our month in Paris, I spent one night each week working from a local office, stacking as many meetings via video conference as I could. I varied my route every time I went to and from the office, and the half-hour walk there after dinner and the half-hour walk home in the middle of the night left me with guaranteed alone time. I wandered along different streets (sometimes taking longer, sometimes getting lost!) and admired the architecture by night and the closed-up shops and storefronts and the few people also out at the hour, usually out for reasons other than late-night check-ins with colleagues in a distant timezone.

How have you navigated your travels as a couple?

Cathlin: It was wonderful to go from seeing Sean for a couple hours a day while we were both working full-time in New York to most of the day every day while we were traveling, but it also meant that we had to keep the romance alive since we didn’t end up apart for long enough to miss each other a whole lot. But giving up some of our together-time to allow for more alone-time was actually an incredibly helpful and successful way to navigate our travels: As much as we wished we could’ve had more date nights, when we got nights or afternoons to ourselves, it gave us a chance to self-reflect… and indulge in the things that the other person wouldn’t be as into. And wow, when we stayed anywhere with more than one room, it felt indulgent; we could put the baby to sleep in one room and hold a conversation in the other instead of our typical hide-until-she-falls-asleep routine!

Sean: Before embarking on these travels together, both Cathlin and I regularly took on our respective chores, errands, and other tasks, whereas traveling together with an infant in tow was a constant exercise in reliance. This sometimes meant with the little things, like cooking dinner, or the bigger things, like choosing Salamanca, Spain for a month of studying. We had ample time to discuss our decisions in advance, but sometimes we had to simply trust each other and agree with the other person’s choice. And we both did a valiant job of rarely second-guessing any of those choices once they were made. Also, traveling so intensely and intimately as a little family together has reinforced the critical importance for both of us of needing to carve off dedicated alone time and dedicated together-time. And that’s a lesson that matters as parents, whether traveling or not.

Any meals that stand out as particularly memorable?

Cathlin: We’ve eaten so well and tried so many foods over our travels, but of course a few meals stand out. My Mom visited us during our time in Paris and we had a really memorable pizza dinner one night where everything fell into place: the food was delicious, Eliza was happy, we drank a bit too much red wine, and it felt like we were doing exactly what we should be doing (this was also only a few weeks into our travels, so perhaps it was a bit of a honeymoon phase too!). And the picnics we had in Paris were top notch, as there’s something about visiting the local market and eating what you buy within the hour that’s hard to beat.

Sean: In Spain, Cathlin came up with a homemade pesto made out of parsley. It was only going to stay fresh for a day or two, but I didn’t need any nudge to spread it on every ounce of pasta, bread, and sandwich I could. And you certainly can’t go wrong with eating at the hawker stands in Singapore, with the added bonus of my sister taking us to see her favorites. But I think the most special meals were during our first trip to Poland and my family there hosted us in their homes. Not only did we dine past our hearts’ (and bellies’) content on pierogi, naleśniki, salads, fresh berries, and cakes but also it reminded me of my first time visiting (and several visits since) so that I almost felt years younger again declaring smaczny (delicious!) as I heaped another serving on my plate, but it also meant Cathlin could experience the same. Eliza has taken to calling pierogi “Polish noo-noo (i.e., noodle)” and can’t get enough of them either. Oczywiście!