Gibraltar, also known as “The Rock,” is regularly listed as one of the top travel destinations in the world, but it always seemed rather tricky to reach—at least until we visited. While in southern Spain with our 16-month-old, we thought a day trip to Gibraltar would be a great idea but couldn’t find many tips on the actual logistics of doing it. So, we spent a magical day there and put together a guide for you!

We chose to stay in the Spanish town of La Línea de la Concepción, which borders Gibraltar, for the nights before and after our day trip. By doing so, the hotel rates were less than half the cost, we found street parking for our rental car, and we had the chance to explore another spot in Spain (and its playgrounds).

To know before you go:

And now, here’s how we spent the perfect day in Gibraltar with our toddler:

11:00: Walk from La Línea toward the border of Gibraltar after a leisurely hotel breakfast. Directions on Google Maps are pretty easy to follow (and also, there were throngs of other people doing the same walk, so we knew we were on the right path).

11:30: Arrive at the border of Gibraltar and make your way through immigration, customs, and security, which took only a few minutes. Catch a local bus to the Cable Car station (we took bus route 10); the price was €2.40 per person as of December 2018.

13:00: Hop off at the end of the bus route and step in line to buy tickets for the cable car and take that bad boy up 412 meters (i.e., 1350 feet) above sea level. Enjoy the view on the way up! Or be smarter than us: plan ahead and save time waiting in line by buying your tix in advance, which we wished we would’ve done. We paid £25.50 each by credit card (Eliza was free) for a round-trip Cable Car journey and access to the Gibraltar Nature Reserve, which includes all the sights you might see.

(Note: When you step in line, you may be approached by taxi drivers or travel agents wearing Gibraltar Tourism tags around their necks, informing you of alternative tours. At first, we thought they were agents associated with the Cable Car operator kindly informing us of an hour-and-a-half wait time to buy tickets. This assertion was wrong: we waited 45 minutes in line, and that was partly because only one of the two credit card machines were operating. They were persistent, but not overly aggressive, and you might be tempted to pay a similar rate to do a taxi tour, though we were glad we didn’t.) 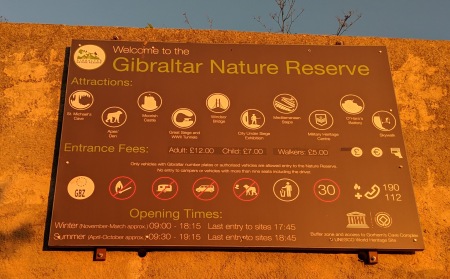 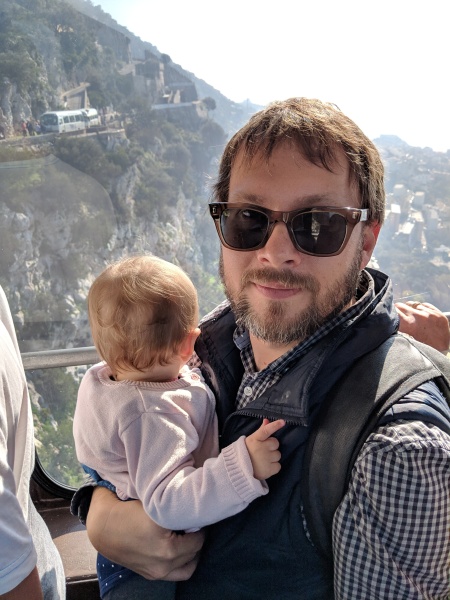 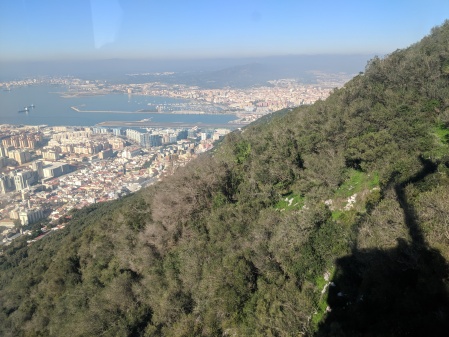 14:00: Sit down for lunch with the most incredible of views at Mons Calpe Suite. Sean, Eliza, and I shared a massive mezze platter and a special vegetarian tagliatelle pasta (off-menu!) that was a hit with all three of us. But honestly, even if the food had been mediocre, we would’ve had a blast listening to Christmas music and watching the fog roll in and out from such a height.

15:30: Walk downhill to St. Michael’s Cave, stopping by the SkyWalk to stand above Gibraltar on a series of glass panels if you’re feeling adventurous on the way. St. Michael’s Cave at first appears to be only a canteen and tourist shop, but once you step inside and to the left, you’ll find a massive and rather breathtaking space. It’s an underground cavern with its stalactites and rock formations alight in different colors. There’s also seating for occasional underground concerts, which can prompt a fun game of “Who do you wish you could see live here?” If you have a stroller, do yourself a favor and leave it at the top—there are so many steps to navigate!

16:00: Notice that there are monkeys. Everywhere. You’d be remiss to not take a photo or several. Note that there are hefty fines if you feed the monkeys on the order of £4,000. And you should read the signs about not leaving your bag open, carrying food in their presence, or making growling noises and faces as an act of open hostility. Eliza loved the monkeys; Sean was scared. 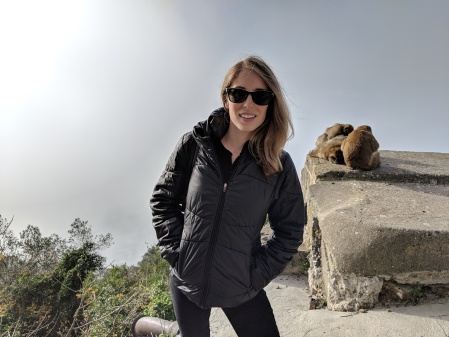 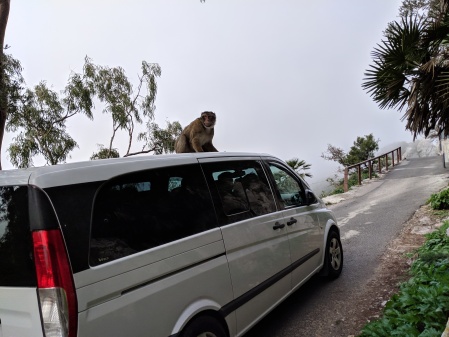 16:30: Visit the Great Siege Tunnels and exhibit. If our schedule had been about an hour earlier, we would have had time to wander the tunnels, which sounded incredibly interesting. But since the exhibits closed before sundown, we only had time to make it to the exhibit where we learned from placards describing history alongside wax figures; however, if you’re short on time, I’d say the exhibit would be fine to cut.

17:00: If you’re walking from point to point, you’ll have been working your way downwards most of the time (with only a couple additional points of incline.) At this stage, you’ll begin the final stretch of your walk down from the Rock. It’s a very steep incline, as you might imagine, so don’t be surprised if your calves are sore the next day. 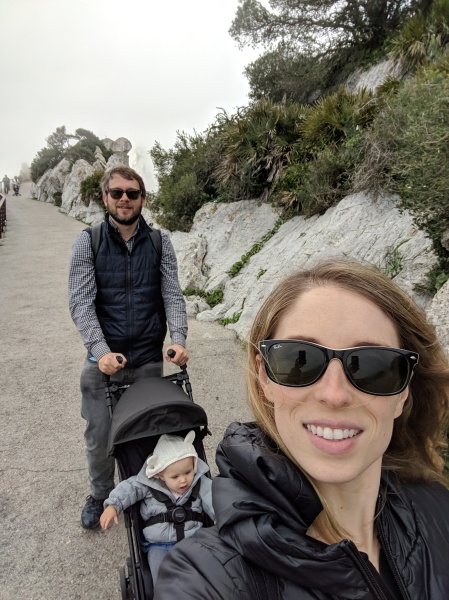 17:30: Take a look at the beautiful Moorish Castle on the way down. The Moors occupied Gibraltar from 711 to 1309 and again from 1350 to 1462, and this castle overlooking the city was completed sometime in the 8th century. The steps down make it difficult for a stroller, but if you’re traveling with older children, this could be extra fun.

18:30: Enjoy a stroll through town and make your way to Grand Casemates Square to assess the menus for dinner or a drink. Again, you might find yourself doing a double-check to find the prices in British pounds after being accustomed to the Euro during an extended period in Spain. And, if you’re like us, you might be hesitant to eat at spots that seem to cater to tourists, but the location and feeling there were perfect. 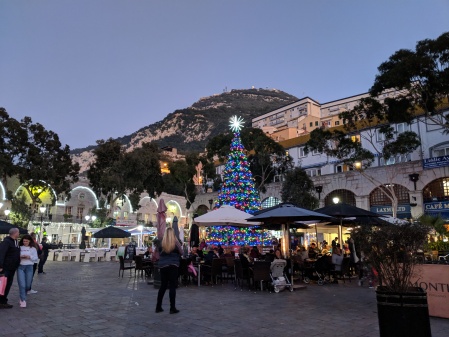 19:00: Eat dinner and give your feet a rest. We chose All’s Well, a British-style tavern with a tasty vegetarian burger, chips, and the heftiest order of nachos. (Sean was pleased; see below.) They also had a great happy hour for £2.50 draught beers from 7-9 p.m. 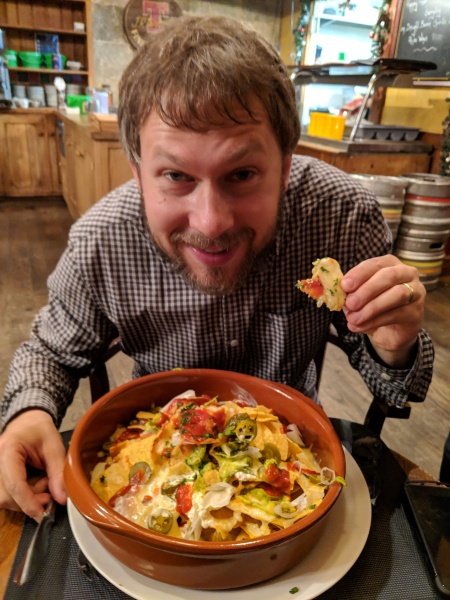 20:30: Walk back to the border with Spain, skipping the bus this time. The walk took about 25-30 minutes for us with a stroller, but only one bus passed us during this time and we had the chance to walk across an active airport runway (!!), where roughly three flights arrive and depart each day. Vehicles share the same road so stay vigilant. Expect delays when planes are on the runway, since this road crossing the airport runway is your only way out of Gibraltar. 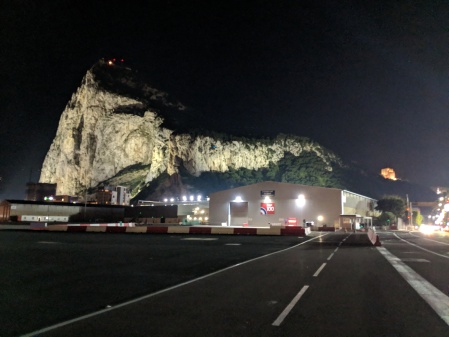 21:00: Pick up your car in La Línea or walk back to your hotel (or take a quick taxi). Treat yourself to a second dinner of tapas and drinks since the Spaniards will only be starting to eat by the time you get back. With all that walking, downhill or not, you deserve it.