These days, I’m not much of a shopper—that is, I’m really not one who enjoys sauntering and browsing to find clothes or other items I might want to buy for myself or others. Perhaps it’s something about parenthood, but I tend to think about shopping as a utilitarian act of buying only what’s needed, rather than as a space for inspiration or with the notion of retail as therapy. Also, why buy anything more than what fits in your carry-on when you’re traveling non-stop?

So you can imagine my surprise earlier this year when I found myself visiting a certain shopping mall in Paris more than once. No, it wasn’t the allure of Parisian fashions; I’d simply heard this location had a stellar view of a stellar city.

That particular place, Galeries Lafayette, in the 9th arrondissement, already has loads of fans so I won’t be the first to suggest you visit, but I might be the first to suggest that even those who despise shopping will probably find this shopping center delightful—from the Art Déco dome to the vast assortment of gourmet foods you’ll be tempted to buy as gifts. But their rooftop takes the cake. Sure, it has a chic bar with pricey drinks, but step a few feet the other direction and you’ll find a large terrace that’s entirely free to visit, whether you’ve shopped all day or only came for the view. That said, it could be hard to walk by the gelato stand without indulging, especially if you’re there on a warm day.

I found myself thinking about the view from the rooftop at Galeries Lafayette much more recently about a thousand miles southwest of Paris—in Spain’s fourth largest city, Seville. Given the maze of narrow streets and alleyways alongside stunning architecture and exterior design, it might again sound foolish to think about spending any time in a department store, but our Airbnb host put in an unexpected good word for the local El Corte Inglés for tapas on the top floor. But more on that in a moment. 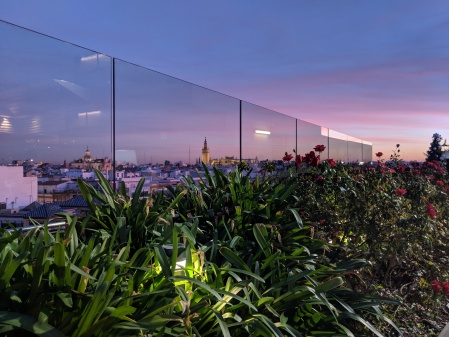 I imagine our readers have plenty of recommendations of other spots around the world with similarly unexpected views, but what struck me in both Paris and Seville was how similar the two experiences felt despite their differences and how accessible they were to us as visitors.

Before we made our way to Galeries Lafayette for the first time, I had read that the rooftop was renowned, and yet still not too widely visited, for its excellent view of the Eiffel Tower. But I found that the view of the Opera Garnier House was even better, given its proximity and the general grandeur. And don’t get me wrong, I can’t resist a good glimpse of the Eiffel Tower, but there are so many other buildings in Paris I find even prettier but that receive only a fraction of the attention and Instagram shots.

If there’s any catch, it’s only that you might feel like you’re at risk of being found out as a non-shopper as you take the elevator all the way up to the top of the building and then seek out an escalator for one final flight up the rest of the way to your hidden-in-plain-sight destination. (If you have accessibility needs or a stroller, there wasn’t  an elevator all the way up—at least not while we were last there in May 2018.) 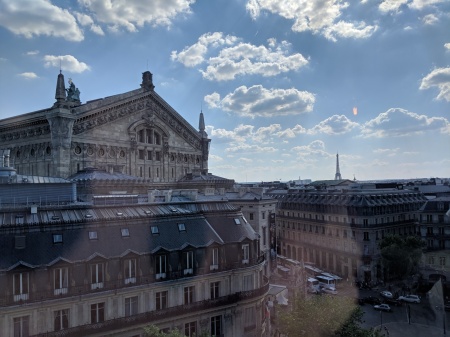 If we hadn’t experienced this kind of space in Paris first, I may have been more skeptical or hesitant to make my way inside and up to the top floor of El Corte Inglés while in Seville, but Sean and I both thought it was a great idea to wrap up our afternoon and start our evening. The only problem was that I had been out for a walk alone and Sean brought Eliza, so we both arrived at our planned meeting point on the ground level of the department store except we couldn’t actually find each other. But it wasn’t that the space was too large. Turns out, I found my way to the wrong El Corte Inglés, another 5-7 minutes of a walk down the street! To be fair, it sounds like there may be a few more lovely views at other locations of this department store in Spain and Portugal.

I may have felt like an old pro when it comes to shopping-center rooftop vistas, but I also felt like I needed a glass of wine after my mistake. Once I arrived at the correct El Corte Inglés, navigated several escalators up to the top floor, and walked into the upscale “Gourmet Experience” food hall, I sat down beside Sean and Eliza at a high table at dusk. Our timing was perfect. There were plenty of empty tables, and the sky had already turned a cotton-candy shade of pink as we toasted to our travels with glasses of local wine. (And we forewent the gelato for a bowl of delicious patatas bravas instead.) The outdoor heat lamps were a thoughtful touch, but after so many weeks of cooler autumnal weather further north in Spain, the 60°F temperatures in Seville were more than enough to keep us warm.

The only thing I couldn’t figure out at El Corte Inglés was why they had so many (quite lovely) flowers and greenery positioned between visitors and the view. I suppose it’s a nice touch, and it’s hard to ever feel upset about fresh flowers, even if they’re standing in the way of a view of the sun-kissed, then sunset-kissed, Seville Cathedral.

I heard while in Paris that there’s a competing shopping center, Printemps, with another gorgeous rooftop view that we didn’t make it to. If you’ve been, please leave a comment to tell me if it’s worth visiting as well.

The bigger takeaway is that wherever you are, don’t be afraid to set foot in a giant urban shopping mall if there’s a view of the city to be had—even if you’re only buying a glass of wine or a gelato, or frankly, even if you’re buying nothing. I certainly can’t call places like Galeries Lafayette or El Corte Inglés off-the-beaten-track or undiscovered gems but if you’re seeking a breathtaking view without the crowds, they’re unbeatable.